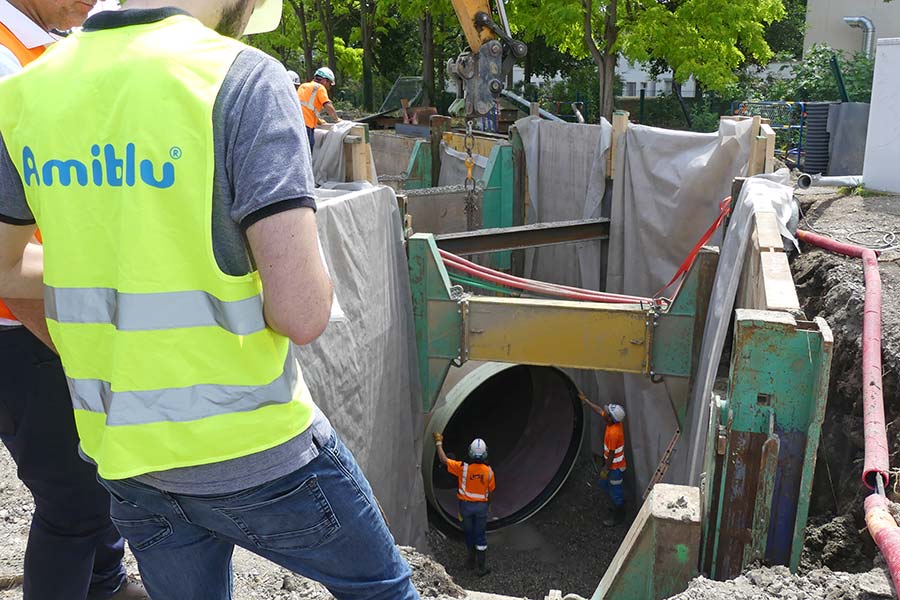 Hobas and Flowtite GRP pipes were installed as part of a new storage system in the city of Clermont-Ferrand. They ensure that the combined sewage is reliably discharged without harming the environment.

The French city of Clermont-Ferrand and its metropolitan area are mainly equipped with combined sewer networks that transport both stormwater and wastewater. Whenever it rains, the networks tend to overflow and thereby pollute the rivers Artière, Bédat, and Tiretaine. As separating the combined networks into two networks is impossible, a big modernization program has been initiated to guarantee the sound condition of the watercourses and improve the area’s waste- and stormwater treatment. This program is part of the European directive on urban wastewater treatment (91/271/EEC) that aims to protect the environment from the adverse effects of urban wastewater discharges.

The program includes the construction of six big storage tanks with a total capacity of 80,000 m³ by 2025. The first 2,200 m3 storage tank was commissioned in 2018, and a second one with 10,000 m3 should start operations in the second half of 2020. It is made of concrete and named “Belle-Ombre” according to the street it is located in, directly in the city of Clermont-Ferrand. In addition to the tank, various structures were needed to complete the system:

The client chose Amiblu GRP for the implementation of the pipe network DN 2400 and the flushing chamber DN 3000. The products’ very good hydraulic performance, long lifetime, quick and easy installation, as well as the professional support by Amiblu experts were especially important due to a number of challenging circumstances: the construction site is located in an area of protection of historical monuments, there was no storage capacity on site, and the area lies in a moderate seismicity zone as well as in a “flood zone” of the Tiretaine river with a high groundwater level and soils of different nature. Moreover, the discharge into the Tiretaine river had to be maintained throughout the duration of the project.

Amiblu supplied 80 m Hobas GRP pipes DN 2400 that were installed in open trench. Thanks to the very smooth inner liner, the pipeline can handle a flow rate of 12.3 m³/s despite a very small slope of 0.55 %. Additionally, a 7 m long vertical Flowtite pipe DN 3000 was installed directly inside the 10.000 m³ tank. It was lifted with a crane and its lower part cast in concrete thanks to a premounted masonry coupling. The DN 3000 pipe forms the main part of a vacuum flushing system that automatically cleans the tank after a rain event. Client, designer, and contractor are very satisfied with the installation of the GRP products and cooperation with Amiblu in this project. 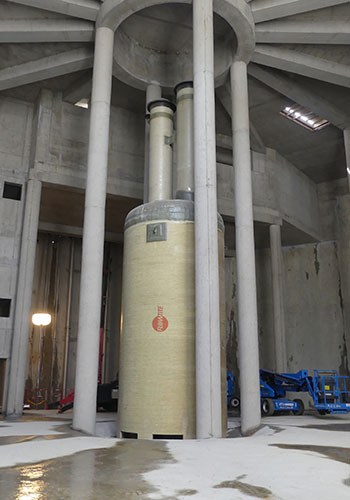