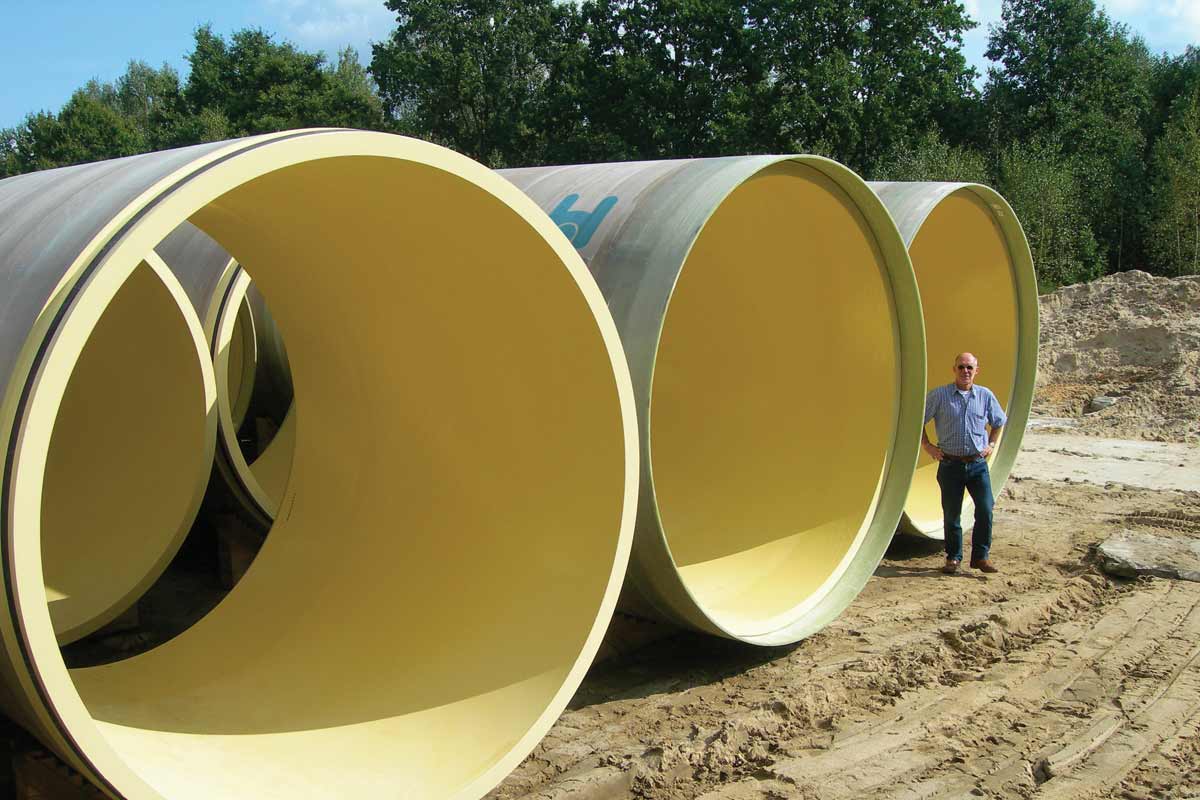 The wastewater treatment plant (WWTP) Czajka is currently being erected on the right river bank of the Vistula River in Warsaw, Poland. After its completion, it shall treat 80% of the Polish capital’s effluents and furthermore make sure that no more untreated sewage will harm the flora and fauna of the Vistula – 30% of effluents are currently flowing directly into the river. As part of the plan, a collector leading to the plant is also under construction. Due to this project’s size, it was broken down into three sections. The first is approximately 5.7 km long and realized with HOBAS Jacking Pipes De 3000 which were installed along the right side of the Vistula, whereas 1.4 km De 3000 are laid on the left river bank. The pipelines meet in the third section where two lines DN 1600 are inserted in a 4.5 m diameter concrete tunnel crossing beneath the Vistula.

Up to now the consortium of contractors Hydrobudowa 9, PRG Metro and KWG (all belonging to the PBG Group) has completed 1600 m of the first pipeline section utilizing two microtunneling
Herrenknecht machines AVN 2000 as well as 2400 and separators HSP 500. One of the challenges that had to be faced is the high ground water level that lies around 1 to 2 m below the surface and therefore reaches 4 to 8 m or 3 floors above the pipe top. Piles by Larsen were set up around the thrust pits and jet-grouting was added to prevent too much water from pouring in. Only this way was it possible to reduce the volume of 200-300 m³/h (= up to 2000 bathtubs of water) to 20-30 m³ which are constantly pumped out. Due to the grouted screens it was furthermore safer lifting the drilling heads in and out of the pits.

Worthwhile mentioning is the 840 m long part of the first section where the pipes were supposed to be jacked from both ends meeting in the middle. However, installations with HOBAS Pipes can be conducted so precisely that the section could be jacked with one single drive and from one side only. The smooth and even outer surface and high stiffness (SN 50000 und 64000) of the relatively light-walled HOBAS Pipes were significant for this success.

Despite the small friction and low forces, the contractor followed the project plan and erected an intermediate jacking station every 100 m. None of these but the last was put into service – although even higher jacking forces would have been possible on the HOBAS Jacking Pipes: SN 40000 – 15,725 kN; SN 50000 – 17,526 kN; SN 64000 – 19,539 kN. This longest single drive was conducted in 2 shifts meaning 24 hours per day and 7 days a week. After its completion the intermediate stations that were replaced by HOBAS Tangential Shafts are reused for different sections of the project.

The tunneling progressed at an average of 3 m per hour, the separator processing 84 tons of soil per hour (=42 m³/h) and a 3 m long pipe takes roughly 0.5 h to be jacked. An interesting fact is that the preparation (disassembly and reassembly of electric cables, slurry pipes and hydraulic hoses) takes 40 to 60 minutes. Considering this and including the breaks for the workers one can say that an average of 10 pipes could be put into the ground per day. At this speed it was possible to accomplish the first sections weeks ahead of schedule. The contractors’ expectations were certainly exceeded, especially, because new sections could now be commenced, given the limited resources of the subcontractors establishing the pits.

In mid December winter brought Poland a lot of snow and the temperatures dropped to -15° C. The contractor Hydrobudowa 9 decided to postpone further works to after the holidays and the beginning of the New Year. Although the cold could not harm the pipes, protective covers had to be prepared for the separators.

Currently, pipes are continued to be jacked beneath the main road of the district Białołęka. An open trench would not have been possible here since the construction works would have impaired the traffic on this important 6-lane road (3 lanes in each direction). The pipeline route runs beneath the middle, the green line, of the road and a single drive over 910 m will break the record of longest single drives in the project. 2 curved stretches with 450 and 900 m radii are part of the section and are realized with 1 m pipes – the angular deflection being well held within the couplings. The 450 m radius is implemented over a stretch of 100 m and a laser to measure the inclination of the pipeline can only be utilized on straight sections, in curves this is done with the help of a gyroscope and water level.

Extra large pipes ask for extra large manholes: The large-scale HOBAS Tangential Manholes which incorporate two accesses due to their extreme length are produced and delivered as convenient modular units that can be easily assembled on site even during frosty temperatures.

To go XXL with OD 3000 pipes for Czajka, HOBAS Technicians developed a centrifugal facility which rotates at 75 km/h. The mold together with the heaviest pipe available result in an impressive rotating 45 ton mass, which by the way equates to 2 fully laden 18-wheelers. HOBAS once again lives up to the motto: Make things happen.