HOBAS GRP Pipes and Manholes installed for drainage of JadeWeserPort in Wilhelmshaven, Germany

International merchant shipping, especially container shipping is rapidly growing and will continue to do so over the next years. In order to account for this development and to allow for the access of ever-larger container ships with deep draughts, the JadeWeserPort in Wilhelmshaven was built between 2008 and 2012. Located at the Jade Bight on the North Sea Coast of Germany, it is the only German deep-water port which is independent of the tides. HOBAS GRP Products provide for its reliable drainage.

The new port was planned on the basis of comprehensive surveys, considering among others the cost effectiveness, traffic, emissions, and effects on humans and animals. 360 ha soil equaling 45.9 m³ of sand were dredged from the sea and replenished to form the 130 ha container terminal.

A sophisticated drainage system was designed for this area and put out for tender by the operating company Eurogate end of 2010. HOBAS offered a complete solution with GRP Pipes, which, in view of the site conditions and the future workflows on the terminal, proved especially beneficial. The pipes are highly resistant against corrosion and chemicals, so the salty and aggressive sea water cannot do them any harm. Their very smooth inner surface minimizes deposits in the pipe system and thereby reduces operating costs. Instead of the standard EPDM (Ethylene Propylene Diene Monomer) rubber sealing, NBR (Nitrile butadiene rubber) was used to meet the high project requirements and strict safety regulations. HOBAS also provided hydraulic calculations for optimizing the flow characteristics. Further special demands were posed on the structural design: It had to allow for the high loads caused by very heavy forklift trucks and reach stackers which transport the containers on the terminal and exert a pressure of up to 16.9 tons per wheel. The structural analysis conducted for all sections of the construction resulted in required pipe stiffnesses of up to SN 16000.

With the port being a security zone, the deliveries to the construction site were rather challenging. They could only be realized within certain time frames, and trucks and drivers had to give advance notice of their arrival. HOBAS developed a complete logistical concept as well as a coordination concept for a just-in-time delivery of the required pipes and special applications in order to ensure a smooth progress of the works on site.

Since the contractor made his decision shortly before the end of the year, the deadline was very tight and the delivery times accordingly challenging. Deliveries had to start at the turn of the year to ensure that the first stages of the construction would be completed by May 2011. On this date, the “Seventh Maritime Conference in Wilhelmshaven” was supposed to take place on the area, with the German Federal Chancellor participating. The complete first cargo arrived right on schedule at the construction site on January 10th, 2011, and all other deliveries went equally smoothly and within schedule.

Due to the ideal working conditions on site, including the possibility to use the available excavators, as well as the light weight of HOBAS Pipes, the installation times could be kept at a minimum. An average of 60 m HOBAS Pipes per day and 6 HOBAS Manholes per week were delivered and installed. After five months, the project was successfully completed on time. The expertise and reliability of HOBAS and the product quality fully convinced the customer. 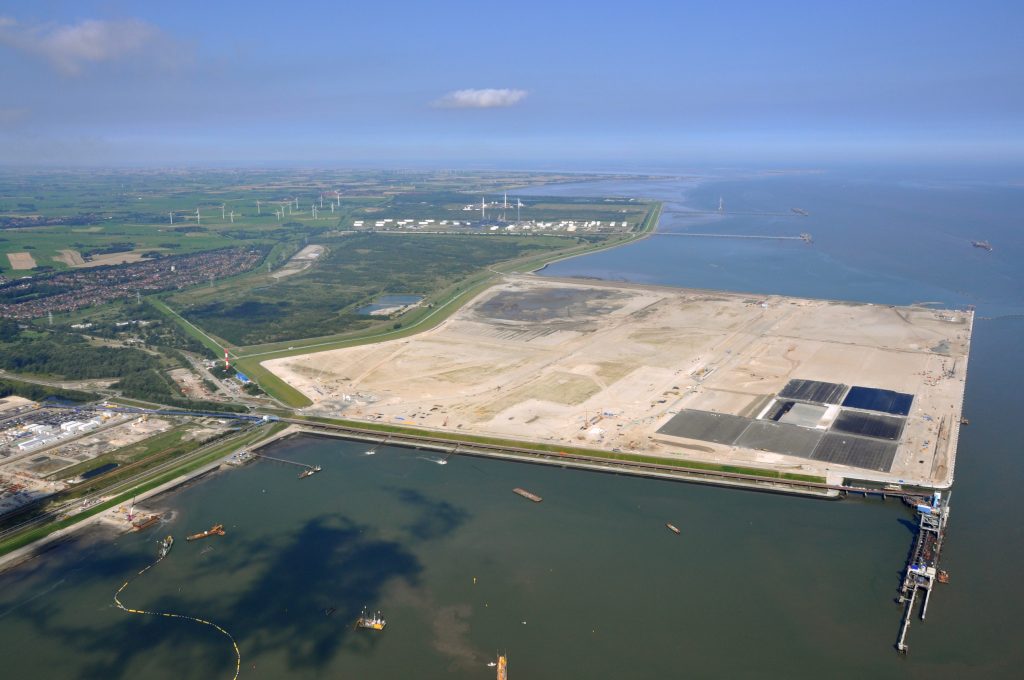