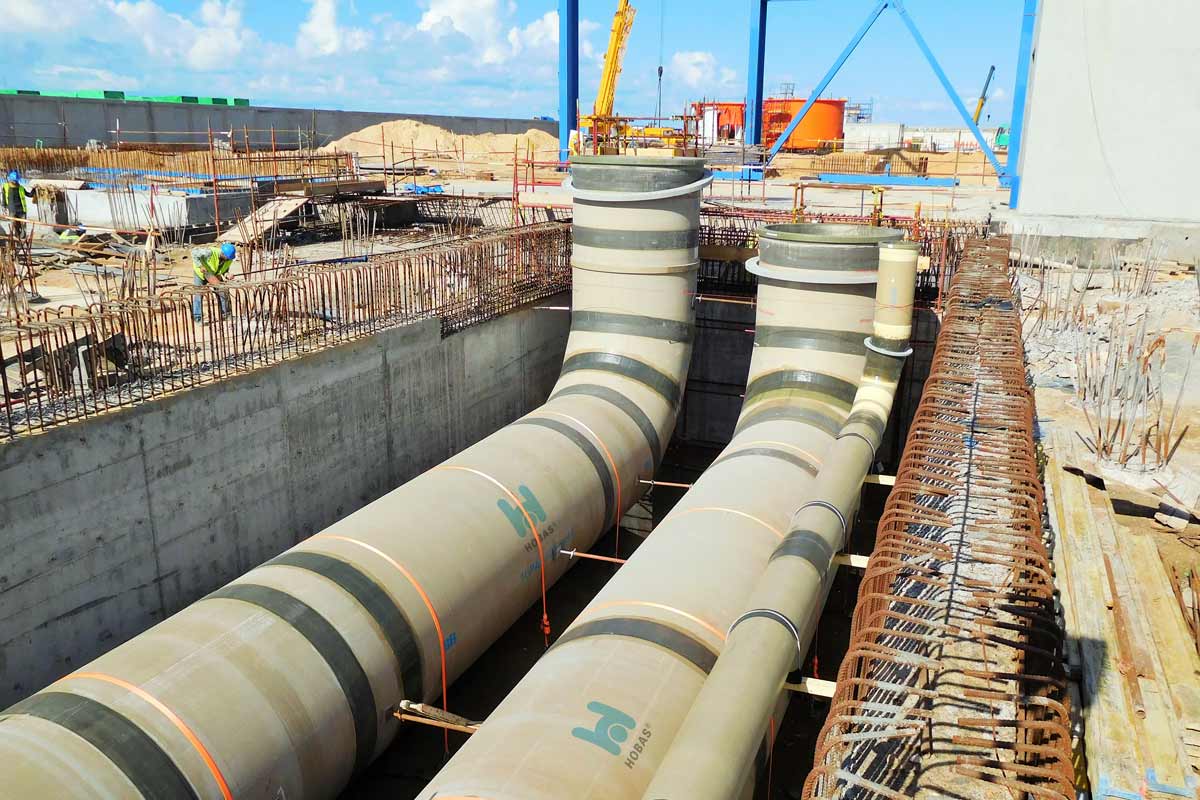 For a giant 4.8 GW combined cycle power plant (CCPP) that Siemens is currently constructing in the Egyptian Burullus region, Amiblu provided the main GRP cooling water lines. The power plant is part of a giant project implemented by Siemens with the aim to boost Egypt’s power generation capacity by 50 % upon completion in 2018.

Three natural gas-fired combined cycle power plants, each with a capacity of 4.8 GW, and 12 wind parks with a total generating capacity of 2 GW, adding to enough electricity for 16 million homes: This is the impressive size of Siemens’ ongoing mega-project for significantly increasing power production in Egypt. The project will underpin the country’s growth and economic development and benefit the citizens by providing new jobs and allowing for long-term reliable power supply.

Since the signature of contracts mid-2015, the comprehensive building works have been constantly progressing. In early 2016, Hobas came on board of the impressive project as supplier of a sophisticated cooling water pressure pipe system for one of the new CCPPs. Approximately 230 m GRP Pipes DN 2500 PN 4 SN 5000 as well as 25 m GRP pipes DN 600 were manufactured as spools, each divided in three sections, at the production plant in Austria. By means of trucks and ships, the pipes were transported to the construction site in the Burullus lagoon area.

Starting in April 2016, the pressure pipes were installed as main cooling water pipelines for all four generating units of the CCPP, running below the power house (flow and return lines). Additionally, a parallel line DN 600 with 25 m length was installed for one unit. Together with the company Rotec, specific flanges DN 2500 PN 4 were developed and produced for this project – the biggest of their kind that had been used in projects with Hobas pipes so far.

The GRP experts of Amiblu custom-tailored the pipes to the project requirements according to a sophisticated design and supplied a comprehensive project documentation. In collaboration with the subcontractor Nessler Plastics, valuable support and supervision on site was provided during the whole installation process – from laminating of the spools to grouting, pressure testing, and a thorough overall quality control. The installation of the Hobas GRP cooling water system was realized step by step in several stages, always in precise coordination with other construction works. Installation works have been completed in March 2017 and a final leak tightness test has been successfully passed. Now the pipe system is ready for operation as part of the Burullus CCPP. The entire Siemens mega-project will be completed in 2018 and reach a total power generation capacity of 16.4 GW.

Click here for more details about the Siemens mega-project: https://www.siemens.com/eg/en/home/company/topic-areas/egypt-megaproject.html

Because these cookies are strictly necessary to deliver the website, refusing them will have impact how our site functions. You always can block or delete cookies by changing your browser settings and force blocking all cookies on this website. But this will always prompt you to accept/refuse cookies when revisiting our site.