In the Polish capital Warsaw, a 3.2 km long HOBAS Pipeline De 3270 has been microtunnelled on the left bank of the Vistula River to transport sewage and rainwater from the central and northern districts of Warsaw to the wastewater treatment plant (WWTP) Czajka. The installation involved the largest-diameter microtunnelled curve ever realized with a CC-GRP pipe so far. The new line will discharge the old Burakowski sewer and represents an extension of the De 3000 jacking project Czajka which earned HOBAS the ISTT No-Dig Award in 2011.

Within almost eleven months, a new interceptor sewer has been installed via microtunneling along Marymoncka Street in Warsaw. The term “micro” seems almost a bit inadequate, given that the new sewer is 3.2 km long and built of HOBAS Pipes with an outside diameter of 3270 mm. It is the largest-diameter microtunnelling project that has been implemented with CC-GRP pipes in Europe so far. The Burakowski-Bis interceptor completes the sewer system leading from the left-bank Warsaw area to the WWTP Czajka located on the right bank of the Vistula River.

Due to its limited capacity, the over 50-year-old Burakowski sewer could no longer handle the large amounts of combined wastewater during heavy rains. Its poor operating conditions posed a threat to the entire sewer system and regularly lead to emergency discharges of untreated wastewater into the Vistula, causing an ecological hazard. The construction of a new parallel sewer with additional retention capacity should allow for a higher level of environmental protection. Furthermore, the new sewer should transport wastewater to the WWTP Czajka and thereby make it possible to discharge and modernize the old sewer. Microtunneling was chosen as the optimal method for the construction of the Burakowski-Bis sewer for the following reasons:

There was no doubt that a trenchless installation would considerably reduce excavation works and traffic disruptions as well as the construction time of the new sewer line. Only a short 47-m-long section of the project was realized in open cut on a green space alongside Słowackiego Street.

The construction project was developed by the company Grontmij Polska Sp. z o.o.. The implementation of the project was awarded to a consortium of companies led by Inżynieria Rzeszów S.A. and comprising Abikorp Przedsiębiorstwo Robót Inżynieryjnych Sp. z o.o., Besta Przedsiębiorstwo Budowlane Sp. z o.o., and Sack Invent Poland Sp. z o.o.. Jacking works were carried out by Abikorp with the microtunnelling machine “Edyta”, which was provided by the German company MTS Perforator.

“Edyta” started drilling on March 18th, 2014. The total length of the microtunnelled sewer line is 3204 m and it consists of seven segments, the longest of which is 613 m, the shortest 107 m. The first and at the same time most demanding section lead from the launch pit at Dorycka street to the receiving pit at the Maria Skłodowska-Curie Bridge. It had a length of 410 m and included a 97 m long curve with a radius of 400 m, which was implemented with 1-m long pipes.

Due to the very good lubrication and high-performance properties of HOBAS Pipes, the section could be realized without difficulties with a maximum jacking force of less than 600 tonnes. The intermediate jacking station originally designed for this section was not needed, which made the assumed work progress of 10 m/day increase to 16 m/per day. The completion of this section can be considered a great success, especially taking into account the fact that it is the largest CC-GRP pipe ever installed in a curve so far.

The installation experts’ qualifications and experience allowed for the microtunnelling to be completed with utmost accuracy on February 4th, 2015, two months before the planned finishing date. The CC-GRP pipes by HOBAS facilitated the jacking works yet again, especially with regard to their high admissible jacking force, which allows for the quick and easy installation of long sections regardless of hydrogeological conditions. The maximal pace of work reached impressive 44.5 m per day.

From initial conception to the design and actual implementation of this largest-ever microtunnelled sewer in Europe, Burakowski-Bis is a real flagship project. Due to the fast realization of the construction and minimal traffic disruptions in Marymoncka street, the social costs of the construction have been exceptionally low. The result of the work of many people, companies, and institutions is a reliable interceptor that will guarantee environmental protection by reducing the rainwater discharge to the Vistula. And it is something to be absolutely proud of. 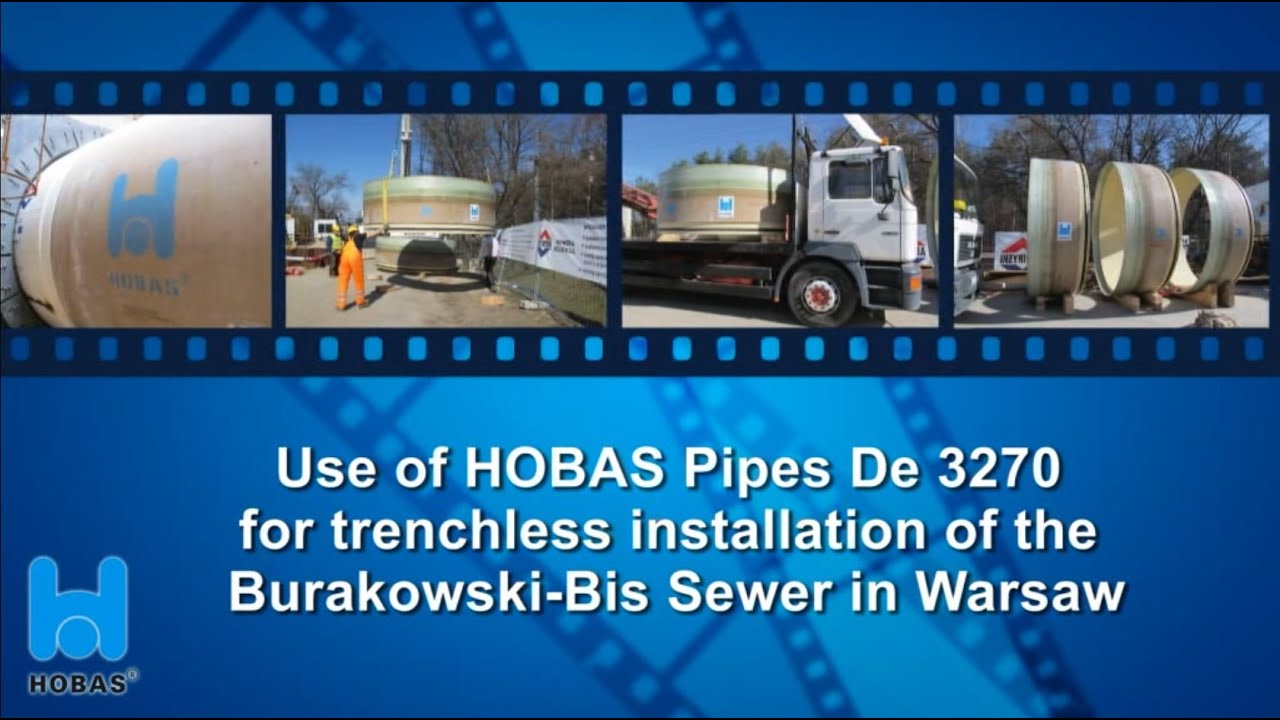