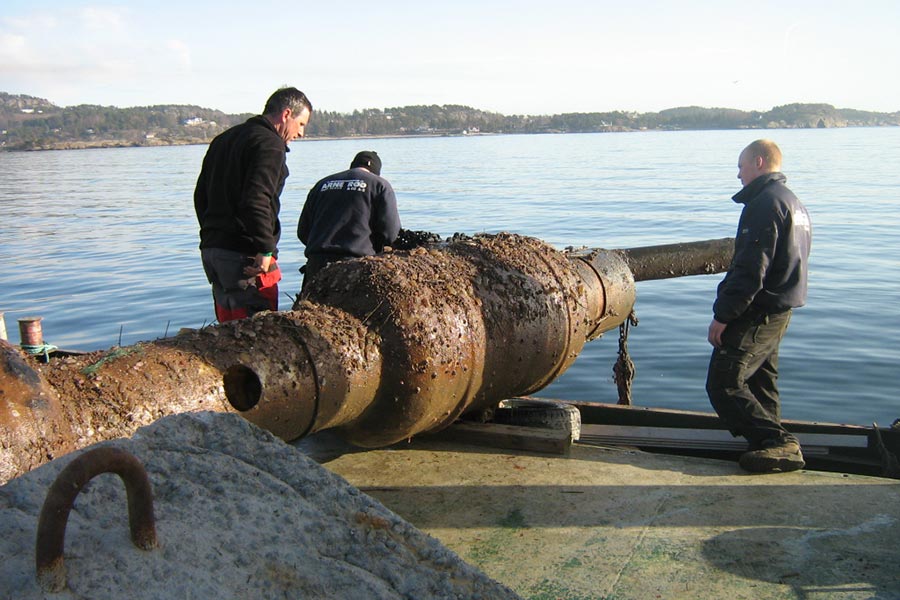 GRP pipes in excellent condition after 33 years in seawater

In 1975, 1500 m of Flowtite pipes were installed as subaqueous marine outfall of the Enga wastewater treatment plant in the Norwegian town of Sandefjord. In 2008, one pipe section was brought ashore to evaluate its condition. The result: A fully functional pipe with very good mechanical properties.

The outfall of the Enga wastewater treatment plant in Sandefjord was installed and commissioned in 1975. Built of Flowtite GRP pipes, the outfall is entirely installed underwater and consists of three different parts:

The outfall was constructed by joining GRP pipes to 50-100 m long pipe strings using GRP butt-wrap joints. The strings were fitted with GRP collars and steel loose flanges at the ends, installed by means of a float-sink procedure, and joined on site using the flanges.

In 2008, a section of the DN 500 diffuser was brought ashore for analysis of its condition and mechanical properties after 33 years of exposure to treated sewage and seawater. Even though there was no chlorination, the pipes showed only very limited biological growth. Samples were cut from the pipe and cleaned. A visual inspection did not reveal any signs of ageing, the internal surface of the samples was as shiny as of a new pipe.

The key mechanical properties of the 33-year-old pipe were measured at the Amiblu laboratory in Sandefjord and compared to the design requirements from 1975. The results are listed below:

In addition, a pipe section was pressure tested to burst. The pipe busted at 25 bar, which is a very good performance for a PN 2.5 pipe.

Bottom line: The GRP pipes have proven to be totally resistant to corrosion and had retained the mechanical properties that applied to the products when they were initially manufactured.