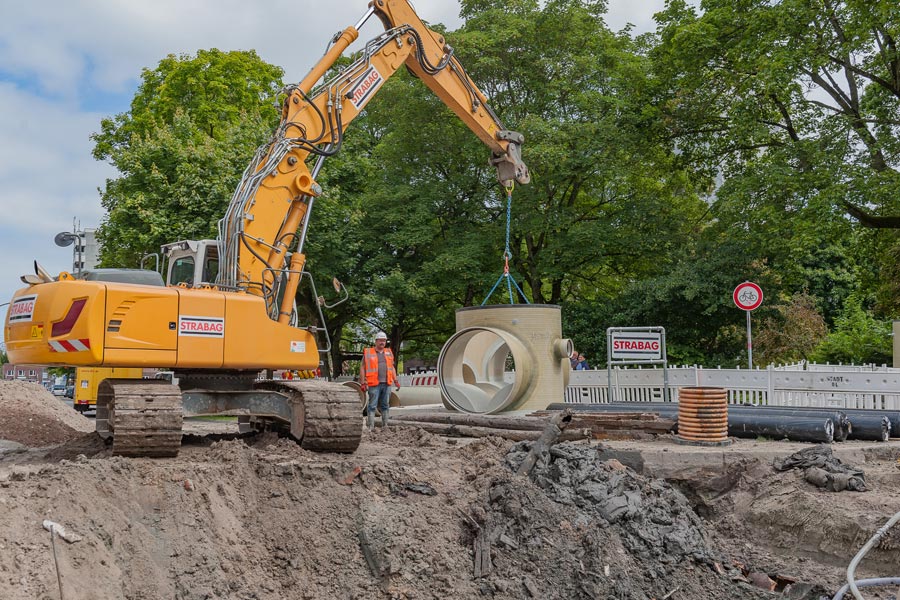 The coastal town of Wilhelmshaven in Northern Germany decided to renovate parts of its sewer system to prepare the town hall district for heavy rainfall. Amiblu Germany supplied 320 m of Flowtite GRP pipes DN 1500 with a very special inside design for this purpose.

The town hall district section of Wilhelmshaven’s 520 km long sewer system was in a critical state: The installed pipes were more than 100 years old and fairly deteriorated, and the whole structure was not designed for coping with very intense precipitation. The city counsil therefore decided to renovate the combined sewer on a length of 320 m, and they chose Flowtite GRP pipes DN 1500, SN 10 000 by Amiblu for this challenging project.

Construction works started in April 2017 and involved the installation of sewer pipes, new service lines, as well as five large-diameter manholes. The channel diameter was extended from formerly DN 700 to DN 1500 in order to improve the hydraulic capacity within the town hall district. A crucial factor that had to be considered was the very small slope throughout the urban area. To ensure sufficient flow even during dry periods and avoid unpleasant odors, Amiblu designed special pipes and manholes with a kite-shaped inside profile. They were produced by laminating quarter sections of pipes inside the DN 1500 pipeline. Thanks to the high stiffness of the rounded pipe segments, it was not necessary to grout the void space and the pipes stay very light despite their “bonus feature”.

Light weight was, in fact, a decisive benefit with regard to the site location right in the city center, where the workspace was very limited. Another important factor was the pipes’ high stiffness at comparably small wall thickness: With a soil cover of merely 63 cm in some places, other materials with thicker pipe walls would have critically interfered with the road substructure.

To realize the installation with maximum efficiency, Amiblu Germany supplied the pipes with ready-made connections for the household service lines and consecutively numbered according to the installation plan. Despite several installation challenges such as heavy rain and instable soil conditions, the project could be successfully completed end of October 2017.