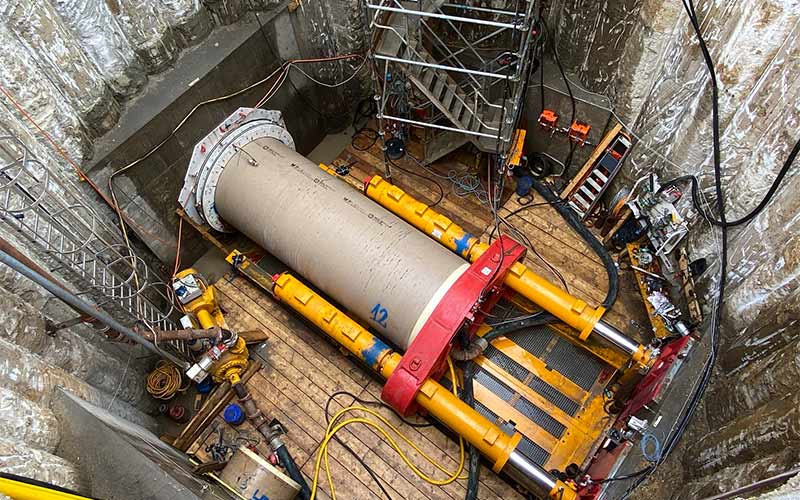 The longest jacking drive ever undertaken using GRP pipes has been successfully completed on a microtunneling project as part of the 3rd lot of the Collettore della Crescenza – Isola Farnese for a sewer pipe installation that will treat Rome’s wastewater.

Microtunneling on the Collettore della Crescenza 3° lotto – Isola Farnese is the third phase of an environmental remediation project of the Fosso della Crescenza, one of the watercourses present in an area north of Rome that is of historical and natural value. The area has been protected since the end of the 90s with the establishment of the Regional Natural Park of Veio.

The first two phases of the project were completed for the Municipality of Rome between 2009 and 2013, with approximately 1.3 km of DN 2000 and 2 km of DN 1600 CC-GRP jacking pipes being installed using the microtunneling technique, in addition to 1.2 km of diameters from DN 1400 to DN 2000, which were installed using traditional open trench techniques.

Phase 3 was the most technically demanding and ACEA Elabori engineers specified Amiblu’s CC-GRP jacking pipes DN 2000 with the phase being divided into six jacking sections with a total length of more than 5.3 km.

The contractors Impresa Mario Cipriani S.r.l. and ICOP S.p.A. faced technical challenges to deliver this project including depths of over 60 m and with four of the jacking drives being longer than 1 km (including one which was a curved drive), groundwater levels up to 30 m from the pipes’ invert and extremely cohesive clay ground conditions.

Stainless steel couplings PN 6 were used for the pipe joints, which can withstand 6 bar and 3 bar of internal and external pressure, respectively.

ACEA engineers requested special external pressure tightness tests for the couplings, which were carried out at the Amiblu GRP pipe testing laboratory in Norway, where the joints were successfully tested at 6 bar for 24 hours.

Additional sealing systems (ACTIVE SEAL) were designed for the intermediate jacking stations (IJS) to counteract the external pressure due to the ground water.

Special checks with finite element calculations were carried out for the sizing of the IJS as well as the pipe clamp used to hold installed pipe in place to avoid movement whilst installing follow-on pipes to avoid the pipeline being pushed back by the force of the groundwater.

The extremely smooth and non-porous external surface of the centrifugally cast GRP pipes made it possible to tackle unexpected, extremely cohesive clayey soils, reducing the jacking forces to the minimum possible.

The project is currently underway and the first five jacking sections have been successfully completed, including the longest drive ever made in the world with GRP pipes of 1,235 meters.