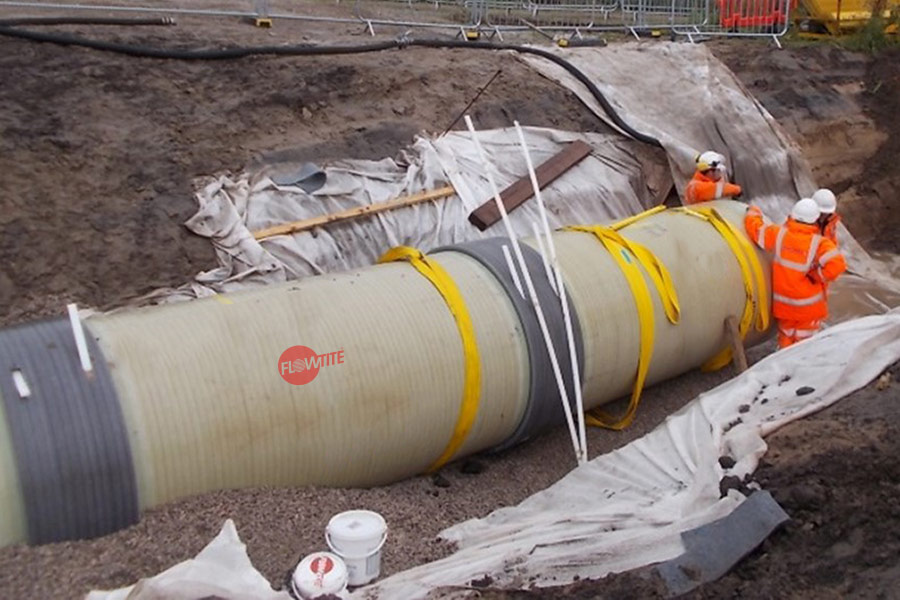 During AMP 6 United Utilities invested £20m into Preston WwTW to improve performance and resilience. Flowtite GRP Biaxial and Pressure Pipes have been installed to assist with achieving project objectives.

Preston WwTW serves a population in excess of 250,000 within the Borough of Preston and the South Ribble Districts.  The Preston Storm Tank Project was awarded to specialist design and build contractor Mott MacDonald Bentley (MMB) with  objectives to reduce stormwater spills and improve both the underperforming inlet works and the primary settlement stage.

All of the inflows to the WwTW were pumped and the catchment generated high concentrations of screenings, particular during storms after long dry periods, resulting in the existing inlet works struggling to deal with the peak screenings load, exacerbated by many recent UID (Unsatisfactory Intermittent Discharge of Storm Water) projects undertaken locally.

The solution was to construct a new storm storage tank with a capacity of 51,000m³ comprising two compartments utilising the same fill/empty pipework for the majority of the pipeline.

Where changes of direction in the pipeline were required, Flowtite Biaxial Pipe and Lock Joints were installed.  This removed the need for expensive concrete thrust blocks and ultimately saved time on programme.

The Flowtite biaxial pipe and  lock joint system is reinforced in the hoop and axial directions to resist pressure, end thrust and bending loads and is suitable for applications where transfer of load between pipes is required.

Measures to improve operability and resilience at the inlet works have been accomplished. Route cause and analysis techniques were adopted to ensure the best outcome and was delivered to a full PAS 1192-2 information delivery cycle. With Preston being a collaborative 3D BIM project, a federated model was compiled by amalgamating several different models from MMB, GHD and Longwood into one which proved advantageous.

Because these cookies are strictly necessary to deliver the website, refusing them will have impact how our site functions. You always can block or delete cookies by changing your browser settings and force blocking all cookies on this website. But this will always prompt you to accept/refuse cookies when revisiting our site.