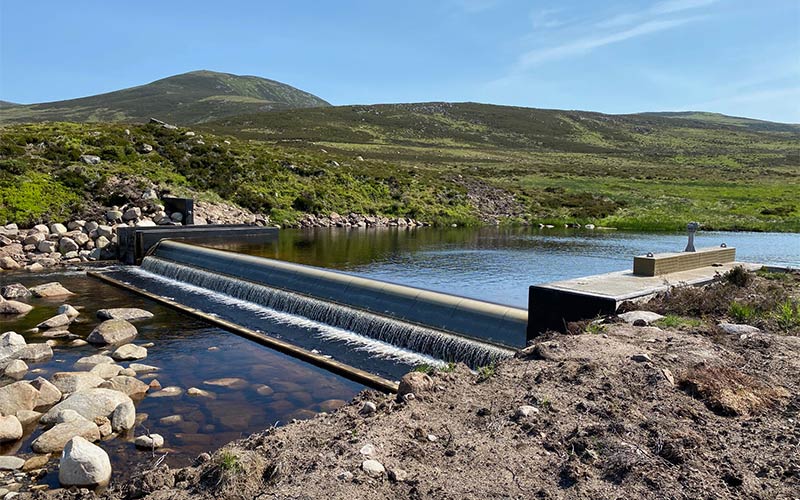 Hydropower supplies more than 70% of all renewable electricity worldwide. For over a century the UK has generated hydroeletric power by harnessing fast flowing water to turn turbines to generate electricity.

In 1898 during the reign of Victoria, the first hydroelectric turbine was installed to provide electric light to Balmoral Castle, since then two further turbines have been installed and in 2020 contractor GPHL Ltd installed two more harnessing the water flows from the River Muick.

With the estate being situated in the Cairngorms National Park, Scotland, an area of outstanding natural beauty, careful consideration had to be taken with the design and construction of the project so as not to disturb the landscape in the process.

Having successfully delivered several previous projects, Gilkes Energy and GPHL were confident in the technical support and delivery service provided by Amiblu, so engaged our services for the supply of some 3,000m of Flowtite GRP Pipes and Fittings to the Balmoral Estate which is now owned by Queen Elizabeth II.

The project was completed within programme and budget and as a part of the legacy of the scheme, improvements were made to the Linn of Muick fish pass to further improve migratory fish movements upstream on the River Muick.“
– David Crozier, Contract Manager, GPHL

1000m of the pipe was laid within a narrow track of less than 4 m wide which follows the meanders of the River Muick; here there was no space to install bends or thrust blocks, so the flexibility granted by using the Flowtite sequenced FPCA (angled pressure coupling) allowed for up to 3 degrees deflection in the pipe joints, removing the need for at least 15 bends and thrust blocks.

A near 50:50 combination of 1.5 m and 1.6 m diameter was chosen to minimise transport costs as they were shipped delivered to site ‘nested’ in a range of PN 16, PN 10 and PN 6 pressure ratings.

Fully operational the pipe now runs at 8 bar with 81m head and has been tested to 13 bar allowing for transient pressure.

Amiblu GRP hydropower solutions are easy to install and adapt to all kind of terrains. They help achieve more kWh with better returns and lower water hammer than any other pipe. With environmentally friendly raw materials in the pipe production (e.g. PET resins) as well as CO₂ savings in transportation and installation. Amiblu GRP penstocks support and speed up the industry’s transition to fossil-fuel free energy production.

Within 6 months of completion site has regenerated to a point where the pipeline is almost indistinguishable from the surrounding undisturbed terrain.”
– David Crozier, Contract Manager, GPHL