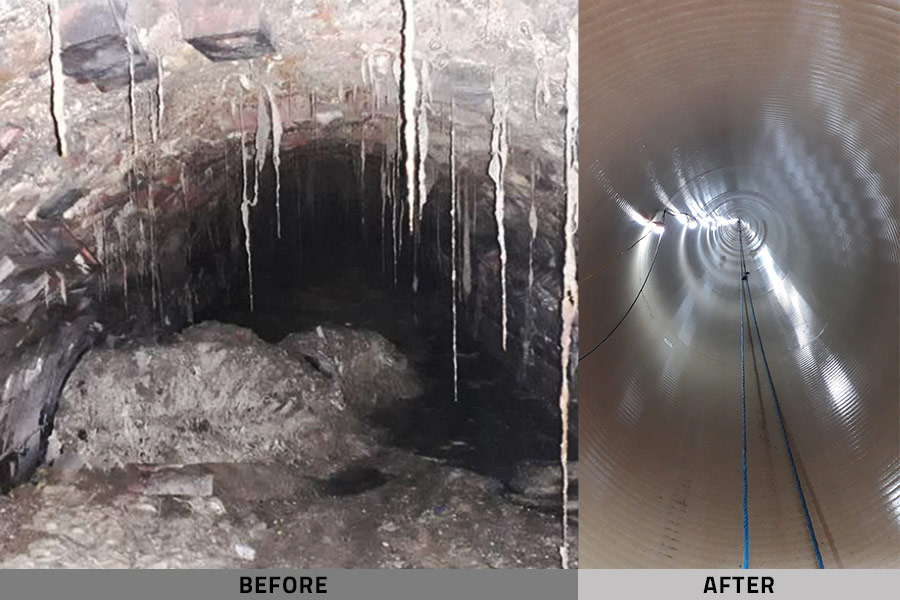 In the British city of Norwich, the life of a corroded sewer has been extended with Flowtite GRP relining pipes. Thanks to the innovative design and a collaborative approach, the initially estimated carbon emissions were reduced by 55 %.

Norwich’s main trunk sewer had been found to be in extremely poor structural condition: Hydrogen sulfide gases had corroded the mortar, resulting in large scale brick loss and a high likelihood of collapse. The @one Alliance design team defined the best solution to rehabilitate the 11 m deep sewer DN 1676 to be GRP relining pipes manufactured by Amiblu. Other methods were considered for the sewer renovation but were deemed impracticable due to the depth and condition of the existing pipeline and the need to create a contingency plan to release flows during the construction process. A major challenge was the temporary bypass of foul sewage; up to 2,200 l/s had to be temporarily diverted to facilitate rehabilitation works. The sewage was bypassed to a temporary pumping station by using a bespoke prefabricated system, allowing the renovation to take place.

Flowtite relining pipes DN 1500 were delivered to the Whitlingham Wastewater Treatment Works fully cured, in a mix of 1 m and 3 m long sections with in-line joints. A severely corroded manhole was dismantled to create a launch pit through which the GRP pipes were lowered and jacked 300 m downstream and 60 m upstream. The thrust wall was specifically designed with a 1200 mm diameter opening, allowing released flows to pass through in an emergency.

The pipes were jacked into place and the anulus grouted to restore the full structural condition of the sewer for another 150 years, eliminating any future risk of H2S attack. With a Colebrook-White friction coefficient of Ks = 0.0029 mm (compared to the current Ks value of 60 mm+ as per the WRC Sewerage Rehabilitation Manual), the new GRP sewer allows for an increased hydraulic performance despite a reduction in cross-sectional area, and a planned future network upgrade to 3,200 l/s.

Following an extensive upfront enabling program, collaborative stakeholder engagement and innovative design, the sewer and connected manholes have been successfully rehabilitated, whilst achieving a 55 % carbon reduction against baseline targets. By July 2019, the sewer was returned to a structural condition grade 1.

Lee Forth, technical manager, Anglian Water @one Alliance: “With tight deadlines to achieve, Amiblu have assisted from design onwards to ensure this project has been a success. Delivery was prompt and, as this was our first project of this nature, their advice to our site team ensured installation went smoothly.”