You are here: Home1 / News2 / GRP pipes are designed for generations. Here’s the proof.

GRP pipes are designed for generations. Here’s the proof.

“Engineered for the next 150 years”: It’s quite a bold claim that Amiblu makes about their GRP products. But how can anyone possibly know, given that the company itself is just over 60 years old? We talked to Amiblu Product Development Manager Högni Jónsson who let us in on some interesting research.

Amiblu promises an operational lifetime of one and a half centuries for their GRP products. Where’s the proof?
Jónsson: To answer this question, we first need to look at the reasons why most pipes do not reach this mature age. These reasons carry names such as thiobaccillus concretivorus and thiobaccillus ferrooxidans – tiny bacteria that decompose sewage and form hydrogen sulphide gas (H2S). When combined with moist air, the gas forms sulphuric acid (H2SO4) which is highly corrosive to materials like concrete, steel, and cast iron. This “microbially induced corrosion” can cause significant damage over time. Corrosion is also a major problem in seawater applications, where the contained sodium chloride eats away at e.g. metals and causes them to fall apart. With GRP products, the situation is quite different.

You’re saying that GRP pipes are not affected by corrosion?
Jónsson: Exactly. Plastics are inherently more robust than both concrete and metals in acidic environments. To prove this, we literally put our pipes to the acid test: Several pipe samples are exposed to sulphuric acid (H2SO4) for a considerable time, while being subjected to artificially high tensile strains (see picture below). The idea is to simulate the chemical conditions in aggressive sewage, but under an excessive strain in order to cause failure within a reasonable time frame. To determine the pipes’ long-term properties, the measured data is analysed statistically and extrapolated into the unknown to predict a limiting strain for use in pipe design.

Strain corrosion tests according to ASTM D3681 in the Amiblu R&D center in Norway.

Did Amiblu invent this test method?
Jónsson: No. The acid test for GRP pipes was first standardized by the American Society for Testing and Materials in 1978 (test method ASTM D3681) and has been in use ever since. The same procedure is also specified in EN 1120 and ISO 10952. The test method calls for minimum 10,000 hours of testing with at least 18 samples. However, since the test is relatively simple to conduct and does not require much space, a great number of samples have been left exposed to acid for much longer time periods. We studied the results from over 40 years of continuous testing of Flowtite and Hobas GRP pipes, involving more than 1800 test samples.

This sounds very comprehensive. Please tell us a little more about these samples and the test setting.
Jónsson: Our tests cover a variety of pipe designs which have been in continuous use. The samples, most of them DN 600, were taken from a number of Flowtite and Hobas manufacturing plants. According to ASTM D3681, we subjected each 300 mm long pipe sample to a vertical force causing tensile bending strain in the pipe invert, while exposing it to a 5 % concentration of sulphuric acid.

A typical test series consists of 18-25 samples, usually from a single production batch, at various strain levels. The strain is measured after the load has been applied and then the sample is stored under controlled conditions until failure occurs, detectable as leakage through the pipe wall.

With at least one data point exceeding 10,000 hours and the rest relatively evenly spread over the time range, and with an appropriate coefficient of correlation, the data can be safely used and extrapolated with classic statistical methods.

How about the results?
Jónsson: The shortest measured time to failure is 0.3 hours at 1.35 % strain; the longest is 28 years and 78 days at 1.05 % strain. The longest, still running test was set up on October 4th 1978. The sample has now been exposed to the acid test for more than 40 years at 0.91 % strain. What’s really interesting here is the bilinear behavior: up to strains of about 1.6 %, most samples fail within relatively short time periods. At strains between 0.9 % and 1.3 %, the time to failure is much longer.

Only a handful of data points fall below this range, meaning that below a certain “threshold strain”, the samples simply do not fail. For this set of data, the threshold appears to be around 0.9 % strain. A classic regression analysis of the data points up to 1000 hours results in a line with a mild slope, while regression analysis of data points after 1000 hours through to over 350,000 hours show an almost horizontal line. By extrapolating this line by only ½ of a decade, which is less than one third of what classical statistics allows, we reached a 150-year strain value of 0.93 %.

Is this a typical strain in sewer or similar applications?
Jónsson: No, and that’s the fantastic conclusion: The typical long-term operating strain of such a pipe is merely 0.27 %. This means that, in real-life applications, we even reach an excellent safety margin of 3.4.

This sounds really impressive! Any project examples that prove this durability?
Jónsson: In 2004, a pipe DN 1800 that had been in continuous use in aggressive environment since 1980 was unearthed and inspected. The pipe came from the sewage treatment plant belonging to the Water and Sewerage Department in Riyadh. After almost 25 years in service, the pipe showed no signs of degradation or deterioration, only a slight change in stiffness. Another sample taken from a pipe in Norway that had been submerged in sea water for more than 33 years showed no signs of corrosion or visible aging either. The mechanical properties were also well within the initial design requirements. 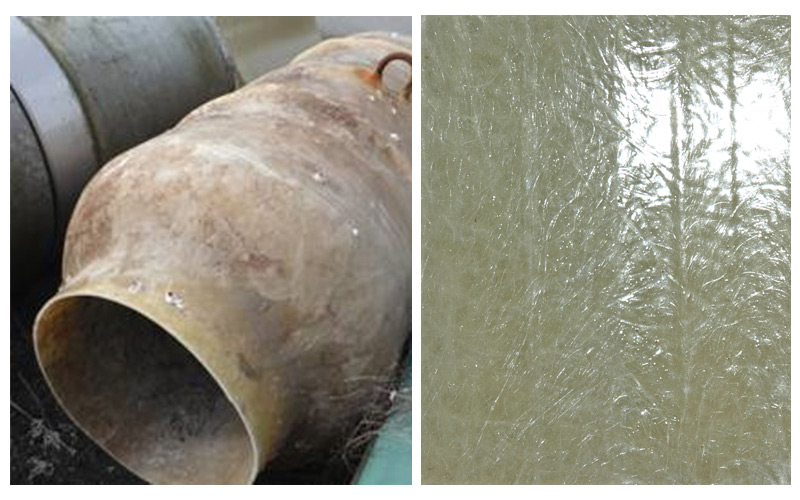 In 2008, after 33 years exposure to treated sewer and seawater, a section of a Flowtite GRP DN 500 pipe was brought ashore for analysis of its condition and mechanical properties. After cleaning parts of it, the pipe looked almost brand-new. The pipe showed no visible signs of ageing and its mechanical properties were basically unchanged.

Bottom line: The 150 years lifetime of Amiblu GRP pipes is a matter of fact!
Jónsson: Indeed. This large database of test results demonstrates the product performance and reveals a service life of more than 150 years with good safety margins. The data shows that, if the strain is below a certain threshold level, the pipes will serve several future generations.